This is a cultural post for Women’s Education Partnership 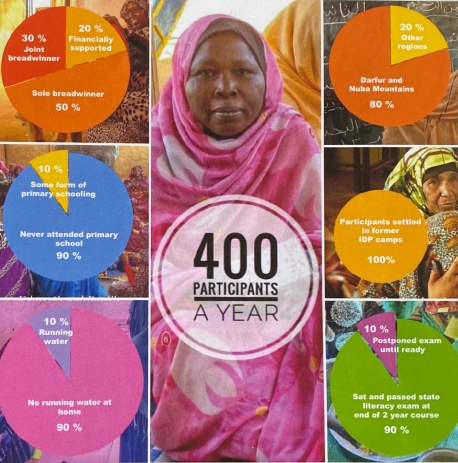 See At a Glance to learn more about our mission and our impact. 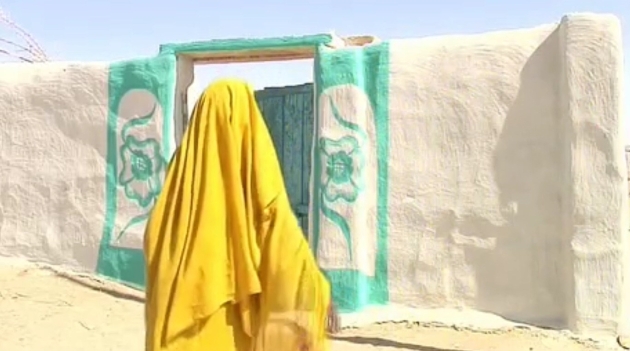 Screenshot from Salah Elmur’s short film, Inscriptions on the Rosewater (view below), a hymn to Nubian women’s vernacular art in northern Sudan. Pictured above, a Nubian doorway. 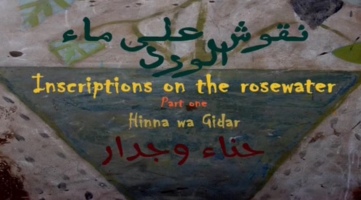 “… a hint from the past which laid the foundation of the paints, feathers, melodies and water with the taste of rosewater accompanied by the smell of the land and the colours and decoration of henna….”  Henna and Walls, film introduction

A Nubian woman painting a crocodile (screenshot from Inscriptions on the Rosewater) on the walls of her home. Crocodiles, often associated with female fertility, are in some regions also believed to be inhabited by ancestral souls or malign spirits (source – Marian Wenzel, House Decoration in Nubia) 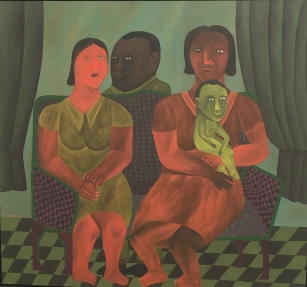 The solemn, staged elegance of Sudanese studio portraits of the 1980’s. Photograph, courtesy of Cate Evans-Paulmier

“I grew up on the crochet designs knitted by my mother, imaginary animals ……men and women in love….circles and triangles in an endless integration with colours no one but me could see….That’s how my eyes were opened, ………….and on my grandfather’s patience, skillfulness and strength in making fishing nets I learn that patience has a taste of honey made of lemon-flower nectar”

The artist, Salah Elmur, and details of his film Inscriptions on the Rosewater

A ram in the arms of a shepherd posing in his Friday best for a studio portrait, sprigs of acacia blooms,  Nile fish held up almost tenderly in tiny hands; the creatures and objects that inhabit Salah Elmur’s work resonate with childhood memories  and the homesickness of a nomad-artist bent on reclaiming and revitalizing Sudanese cultural landscapes. They are, according to Yasser Sultan,  reviewing Elmur’s work at Gallery Misr, shifting talismans of the remembered love of multiple exiles.

Details from Elmur’s works at Forests and Spirits, 2018 – talh and acacia flowers.

Elmur confesses in his blog to a life-long hobby of collecting old and everyday objects  as sources of artistic creativity.  And this hobby,  Sultan hints, may have grown out of his childhood fascination for the “small ornamental metal box” of photos his mother kept and which he would return to again and again to pour over the faded pictures of his family’s past.  Such objects and memories, Sultan claims,  form the leitmotifs that echo throughout his paintings as he reasserts the “indigenous talent”  and uniqueness of  Sudanese vernacular art.

Children’s book illustration by Salah Elmur. Inspired by his desire to provide young Sudanese with images reflecting their folklore and cultural landscapes, Elmur has illustrated more than 25 multilingual children’s stories. 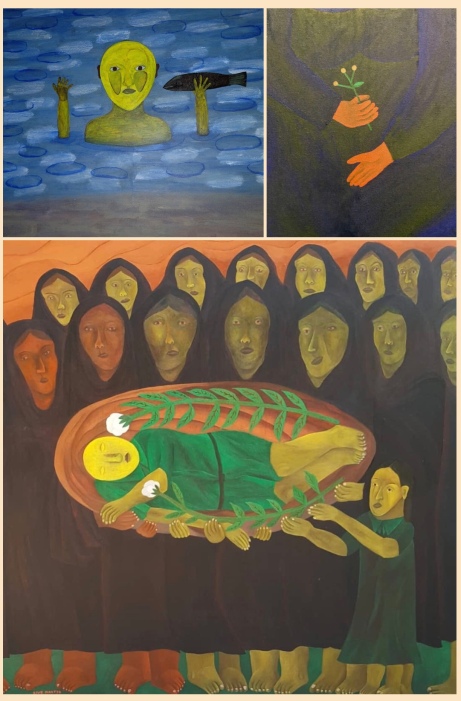 Exhibited in Forests and Spirits. Elmur’s pink trees, Sultan suggests, are symbolic of growth and prosperity

The white and pink walls of the Nubian homes featured in Elmur’s film are also canvasses inhabited by the creatures, talismans and life stories of their families and communities.  Crocodiles, scorpions, foxes  – all imbued with protective powers; birds, sacred symbols of blessing in Islam; flowers and palm fronds flow across their hand-smoothed surfaces. Facades and doorways are often studded with saucers, plates or mirrors and gateways mounted with crocodile skulls, antelope heads and horns.

Flowing flower motifs are echoed in the designs chosen for henna body tattooing, embodying what Elmur sees as an aesthetic continuum among Nubian women.

The flowering of Nubian house decoration is identified by Marian Wenzel as starting in the 1920’s when flows of cash from husbands and brothers, often working as cooks in Egypt and Khartoum, enabled women to complement their own pre-existing decorative designs with elements inspired from contact with Egypt and western imports and to empower households later to commission professional male wall decorators and house builders.

Marian Wenzel’s research was conducted over fifty years ago. Elmur’s short film below is dedicated to the creative and imaginative skills of contemporary Nubian women in house decoration while acknowledging the role of pre-Islamic imagery.

Screenshot from Elmur’s film, Inscriptions on the Rosewater. Nubian women setting plates in to the fresh mortar of their doorway. This custom is said to celebrate the generosity of the householder and her pride in the cleanliness of her home,  as well as serving as a talisman to deflect the evil eye.  In older houses, Wenzel noted in her research,  pebbles and shells from the Nile and Red Sea sold as charms were also used to protect against the evil eye.  Wenzel traces the use of plates to the turn of the twentieth century.

Dust jacket of Everything is Possible by Margaret & Alick Potter. Alick Potter was professor of architecture in the newly independent Sudan of the late 1950’s

Inscriptions on Rosewater and the Art of Nubian Women – The Film

As her friends and neighbours gather round, clapping and singing their support, Omama climbs the delicate ladder propped against the doorway of her home, to place a flowered plate in the freshly mortared facade in a celebration of well-being, welcome, purification and the joy of  community working together as neighbors and friends.

1 The patterns, shapes and motifs of Nubian house decorative art is not prevalent in the house decoration of other Sudanese regions.  This might stem from the strong Christian tradition of image-making in pre-Islamic Nubia or hark back to Shia influences in the veneration of holy men’s tombs.  Crosses are still found as recurring motifs and images reminiscent of ancient Nubian crowns and pagan iconography.

Lime handprints on an exterior wall made by the young girl photographed, p 63, House Decoration in Nubia.  Wenzel distinguished between the magical and the decorative in the imagery of Nubian women’s house art.  Handprints of lime or animal blood and cross-like emblems on storage pots are seen as magical in nature and she speculates that blood prints may be held to have life-prolonging powers.  Her research indicated a progression among women’s house art from the magical to the decorative and imitative to the commissioning of professional male artists  over the early and mid twentieth century, who in turn influenced decorative imagery.

Seen near Dongola, Northern Province, in the early 1980’s

2 Men and women’s decorative art differs in the motifs chosen, with men preferring to depict cars, mosques, flags of Sufi orders, boats and stars.  Men’s sitting rooms were often decorated with saucers, pictures of holy men and even female pin-ups.  Boys were found to enjoy painting camels donkeys, dogs and souq lorries carrying people to markets.  Wenzel claims that women never painted scenes of everyday life while both sexes painted wild animals. Only women, however, she was assured, painted fish.  Before professional decorators became fashionable, women used patterns traditional to the village and daughters about to be married prepared the rooms where the bridegroom would be received.  Interestingly, bridegrooms tended to copy women’s decorative styles when painting. 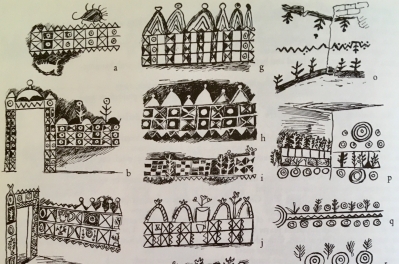 Marian Wenzel – wall designs typical of women artists.  Wall friezes often echoed the patterns found on the mats and baskets which had also earlier been used for decoration

3 Blue tints obtained from clothes whitening  and white were popular tones at the time of Wenzel’s research and were associated with purity and often used to honor returning Hajjis and depict scenes from the Hajj, the as the Kaaba.

4 Wenzel recorded the artistic influences and professional trajectories of many of the profession artists who enjoyed popularity at the time of her research.  Many led colorful lives, which she entertainingly relates – such as that of a much married Coptic Egyptian on the run from both Sudanese and Egyptian authorities who worked in Dongola.

Illustrations from Watch your Step, Khawaja, A British Teacher in Sudan, 1958-1966, by Peter Everington, p111-113, doorways and facades in Argin

5 It was through interviews with one such artist, Hassan Araby, that Wenzel began to question where many, apparently non-indigenous motifs and designs had originated and was finally able to establish a link between the designs on Huntley&Palmer biscuit tins exported to Egypt and Sudan at the turn of the twentieth century or brought in by British soldiers and imperialists.

How Wenzel told the story to the Potters  (Everything is Possible)

Everything is Possible, Dr. Wenzel Takes the Biscuit, p 177

The decorated houses of Nubia

“Abdallah Salih Suleiman, age 75, lives in such a house near Kerma. He was born on Badeen Island in mid-channel and remembers his old home’s outer wall adorned with a white lime-plaster image of a lion holding a sword, surrounded by sunbursts. “Whenever a child in the family lost a tooth, he would throw it at the wall, and where it struck, in that place we would then paint a sunburst as a wish for a new tooth. Our doorway also had a plaster cattle egret, which we call here sadeeq al-mazreeq, or friend of the fields, because it is always a welcome guest.” Egrets eat insect pests and make the farmer’s job that much easier.”  Learn more about the lion motif mentioned here in The decorated houses of Nubia – Aramcoworld short illustrated article

Lion motif similar to that described by Abdullah Salih Suleiman above,  pictured in Everything is Possible, Our Sudan Year by Margaret & Alick Potter, 1984

My thanks to kind friends of Sudan English Teachers FB Group and Professor Peter Woodward, whose comment at a recent symposium inspired this blogpost.

This is a cultural post for Women’s Education Partnership