“A Necklace of Shells from Distant Seas…” 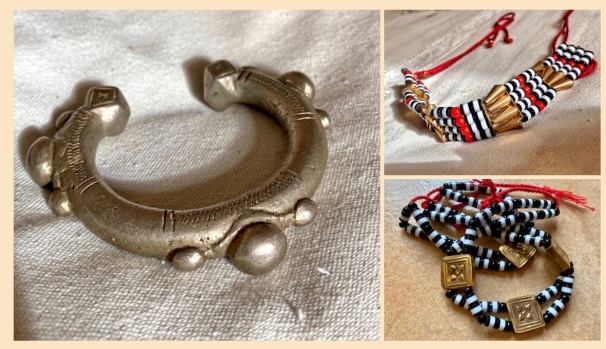 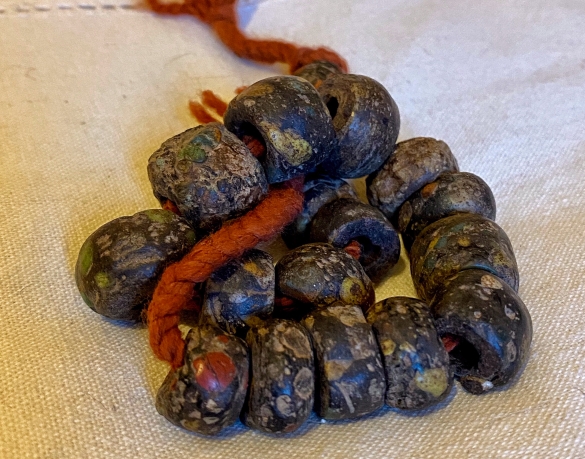 Above, Sudanese anklet, (hijil), choker necklaces or matarig, with their cone-shaped beads known as jitti and square hollow gold beads, called jakkid,  together with a string of black speckled Hebron beads. 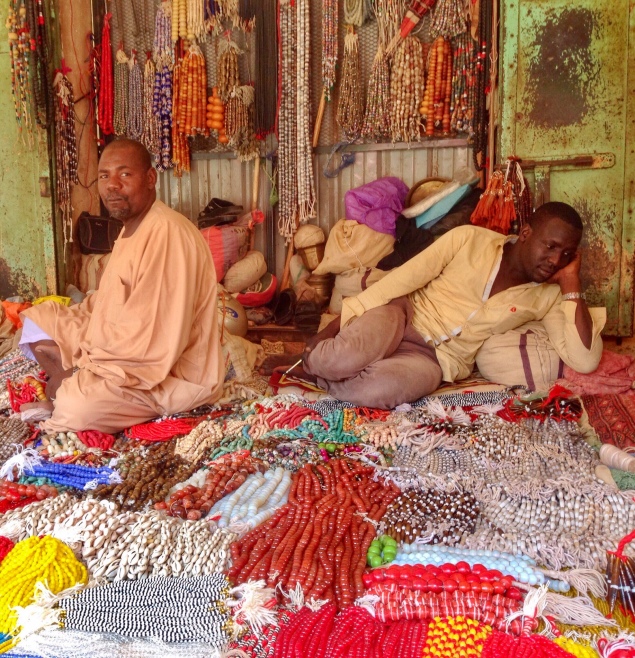 This is a cultural post for Women’s Education Partnership.  See At a Glance  and Facts and Figures to learn more about our mission and the life-changing impact of our Arabic community literacy program.

The tribe is both sustenance and a finely-wrought necklace…” Traces of an Unknown Woman, Al-Saddiq Al-Raddi

““Civilization springs from a river: /  the brilliant glint of an amulet / permits this story to be told ……….The firstborn is an enigma / an amulet / a mirror / fused from burnished copper / an icon of the sun buried in a grave ……”

Lines from The Key of Life  by Saddiq Al-Raddi

Above, sketch of a cowrie shell and bead strand, encircling the waist of a Kordofan baby. Based on a photo from Sand in my Eyes, Enikö Nagy

“At the age of seven months, a boy child would be adorned with with a silver disc worn at the end of a string round the neck, called hfidah, which was supposed to have magical power, as certain magical formula were inscribed on it. It was removed when the child became five years old or so.” Abdullah El Tayeb, writing in 1950s on Changing Customs of The Sudan, p35. 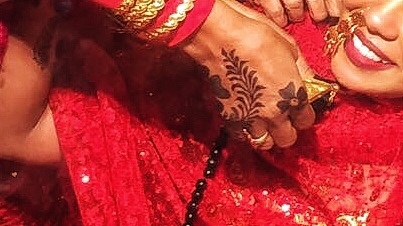 Writing in the 1940s on Charms and Customs Associated with Child-Birth, Elaine Hills-Young observed that bridal jewels were “worn at the wedding and for forty days afterwards. They are then kept in the Sahara – bridal chest – with her clothes until the girl becomes pregnant, when they are worn from the seventh month of all pregnancies until three days after the birth. Then they are wrapped in a cloth or handkerchief and kept on a table or the bed near the mother for forty days….*

“A clay pot punctured by millennia / A necklace of shells from distant seas, of shells gleaned from a far-off riverbed”……Traces of an Unknown Woman, Al-Saddiq Al-Raddi 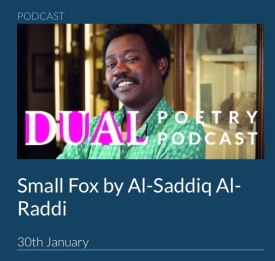 Al Raddi found inspiration for many of his poems reflecting the complex and kaleidoscopic nature of Sudanese identity during his time as poet in residence at the Petrie Museum, London.  Learn more about Al-Raddi, his work and the museum’s Kushite artifacts in

…” a necklace of shells from distant seas …”

What remains: a ladle that keeps its own counsel / A clay pot punctured by millennia / A necklace of shells from distant seas, of shells gleaned from a far-off riverbed – / pottery / stained with the patina of copper – the blown egg of an ostrich, etc, etc / what remains: revelation – Traces of an Unknown Woman, by Al-Saddiq Al-Raddi – more below.

Above, plate from research paper, Beads and Pendants from the Tumuli Cemeterie at Wadi Qitna and Kalabsha-South, Nubia, Beads, Journal of the Society of Bead Researchers, Volume 28, Joanna Then-Obluska. 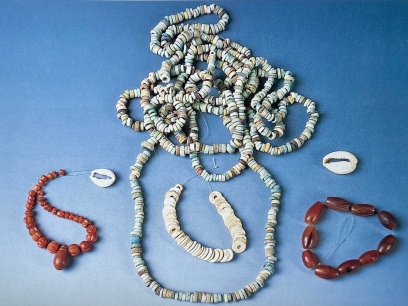 Ostrich shell beads from the Mesolitic / early Neolithic era found in Sudan (British Museum). Ostrich shell was still being used in Darfur in colonial times for bead making, as documented by archeologist A.J.Arkell, writing in 1936 in Beads made in Darfur and Wadai  1945, where he noted “ a string of them is frequently worn by men round their loins, and that one string which he counted contains 6860 beads..”

The methods he recorded used to manufacture the beads in Darfur echoed ancient techniques and closely resemble those above from southern Africa. 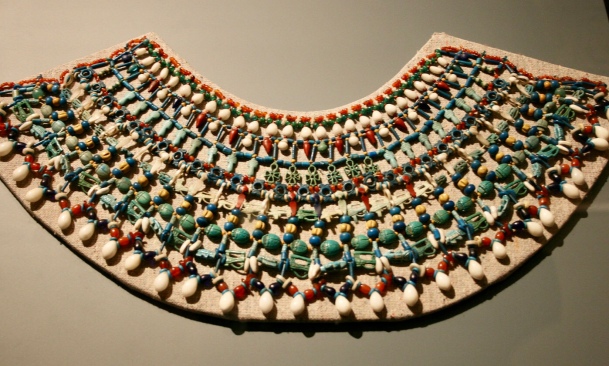 Below a Nubian Beadwork and Cowrie Apron, Bisharin, 19th Century. Website commentary notes the apparent parallels to the Nubian collar above and the possible “remarkable continuity of design over 2000 years”. 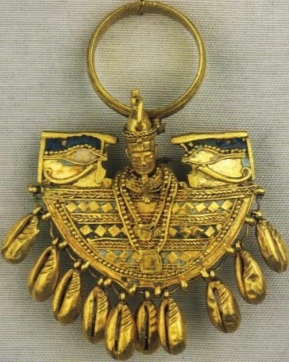 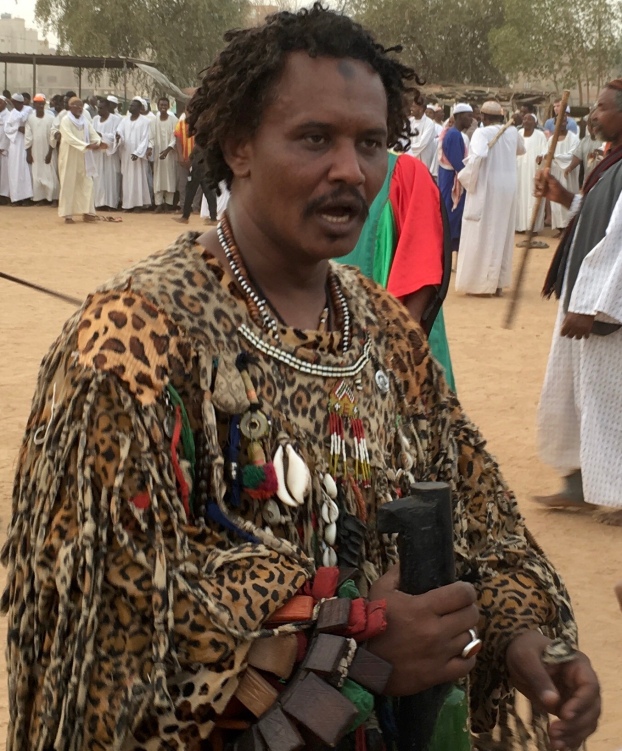 Above, cowrie shells, beads and hijabs (leather talismans containing sacred script) worn by a Sufi mystic in Omdurman. See The Eternal Dance and Sudanese Moments for more on Sudanese Sufism.

See coming post on leather hijabs and their history in Sudan.

Below, detail of a Sudanese lyre frame, bedecked in beads, coins and cowrie shells.

Traded as currency for centuries in Africa and used in the divination rites of wada’a,  cowries have multiple talismanic resonances.

Photograph believed to have been taken between 1880 and 1905.

This is a cultural post for Women’s Education Partnership.  See At a Glance  and Facts and Figures to learn more about our mission and the life-changing impact of our Arabic community literacy program.

In title photo and above, speckled blue-black Hebron beads, and metal amulet from early 1980’s, Omdurman, together with modern black and red prayer beads.  The title photo also shows a fossilized fish bone from the Bayuda Desert. See Hagoo below for fishbone beads.

In Hebron Beads in Darfur, (Sudan Notes and Records 1937) archeologist A.J.Arkell traces the origins of Hebron beads, their varieties and manufacture; their journey from Hebron glass makers in Palestine  along ancient trading routes and their decline in popularity during colonial times. He notes: “They are practically never worn. I have occasionally seen a single green one worn on a string round the ankle by old women as a cure for rheumatism.”

See more in Beadmaking in Islam: The African Trade and the Rise of Hebron 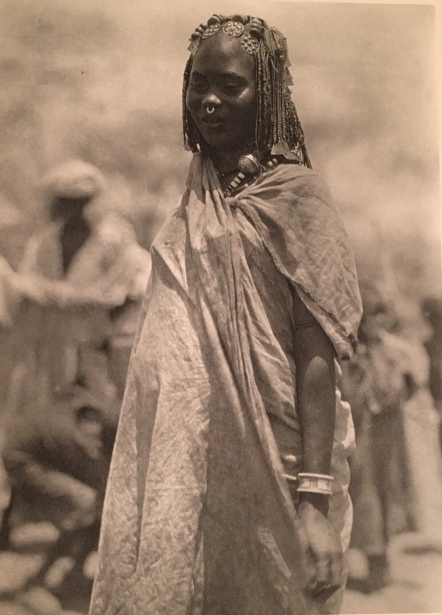 An Awlad Hamid tribeswoman with her silver and amber ornaments and ivory bracelet. Photo: Der Dunkle Erdteil, Atlantis Verlag Berlin, 1930. Ivory objects such as the bracelets below were also used in zar rituals.

Read about their work in The Long Tradition of Filigree Jewellery Making In Sudan:

The silent testimony of sacred objects found in the grave of an unknown woman and conserved in the Petrie Museum, London, inspired Al-Raddi to write this complex elegy to Sudanese history and identity:

“Each millennium a woman journeyed along Darb Al Arbaien / Richly attired as she traveled the road back and forth / She may not return / Each millennium she starts out once more ……..

What remains: a ladle that keeps its own counsel / A clay pot punctured by millennia / A necklace of shells from distant seas, of shells gleaned from a far-off riverbed – / pottery / stained with the patina of copper – the blown egg of an ostrich, etc, etc / what remains: revelation”

Read the complete poem here: Traces of an Unknown Woman,

Background on the items found with the unknown woman:

Some Examples from Northern Sudan with Proverbs

Below, book cover of Sand in my Eyes, showing Kababish nomad woman, Al-Hamrat Al-Sheikh, adorned with zumam, maragit and teela.  This beautiful tribute to Sudanese cultural diversity and wisdom documents many examples of Sudanese jewelry. and tribal adornments. 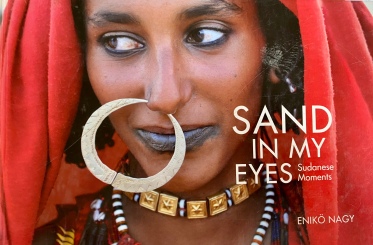 Griselda El Tayeb recalls that until the 1960s,

“Most women wore the zumam which was a small gold nose ring sometimes attached by brides to the earrings by a thin, ornamental gold chain. In the 1940s and 50s this ring was sometimes replaced by a small gold stud in the shape of a flower bearing a small coloured stone.”

Above, a matarig, a type of choker popular among Nubian and Riverain women as well as eastern Sudanese.  The cylindrical beads, made of natural stone are known as gasees. “One typical matarig consisted of five parallel rows of agate interspersed with gold, double, cone-shaped beads called jitti.” Nubian Dress, Regional Folk Costumes of The Sudan, by Griselda El Tayeb, p 47.

Griselda El Tayib’s portrait of a Nubian woman in the 1970s, displaying some of her prized pieces of jewelry, including the matarig and teela around her neck and silver shil-shil framing her face. Regional Folk Costumes of the Sudan.

My thank to Muna Zaki for kindly providing this proverb referring to the teela:

Griselda El Tayeb noted that the fidayat and its larger, heavier sister piece, the mutgal, associated with wedding celebrations, along with other traditional pieces, were starting to disappear in the 1960s and “women had all their gold beaten into bracelets called ghuwaishat.  Recently the fidwa has enjoyed a revival with a resurgence of pride in Nubian culture and history in times of political upheaval.

And a modern take on an age-old symbol:

Once again, my thanks to Muna Zaki for providing this interesting and humorous proverb referencing these earrings: 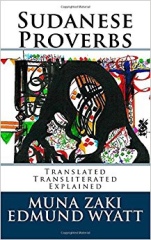 An Example from Eastern Sudan with Proverb

Griselda El Tayeb meticulously records changing trends in the regional costume, jewelry and other adornments of both men and women in her Regional Folk Costumes of the Sudan, 2017. Writing on the dress of Beni Amer tribeswomen in the 1960s, she provides this description of a grandmother:

“Around her neck she wore on her bare breast a double row of sibhas, prayer beads like a rosary, made of black wooden and red glass beads and a leather hijab amulet on a leather thong.   In her left nostril, she wore a thick hollow gold nose ring called a nazaled, and the plain gold nose ring known as fay in her right nostril. She also wore heavy silver anklets, called hijul.  These have been almost entirely abandoned by the younger women.” Regional Folk Costumes of the Sudan, p 79.

The hijil (hujjul) she writes of were usually made of silver, a metal prized more among eastern Sudanese for its talismanic powers than in the north where gold is more plentiful. Traditionally, the hijil was worn by young girls before marriage to seek protection from the evil eye.

A popular Sudanese proverb alhijil bil-rijil, literally the anklet on the leg, celebrates inseparable companions – ones who go everywhere together.  My thanks to Muna Zaki, see above, for explaining this proverb. 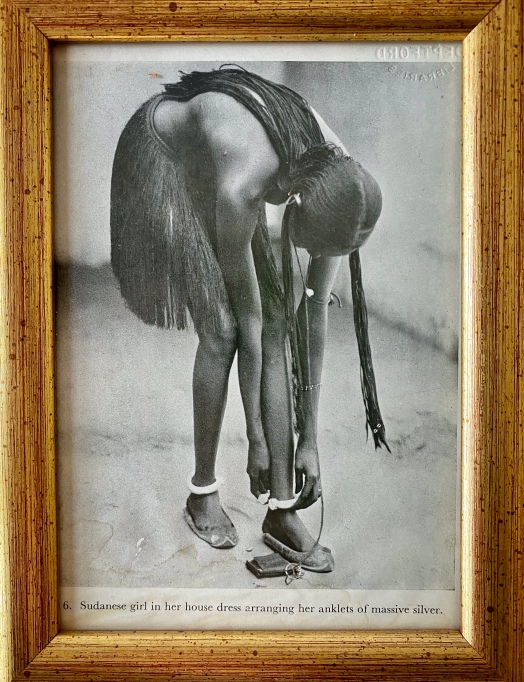 Colonial era photo circa 1930’s. On the ground, next to her foot is a mufhada, the traditional leather purse worn by women, often strung on a double string of red gittan and which is usually concealed below thigh level under their garments.

Young woman wearing medallions in her hair known in eastern Sudan as Abojalab and a murwad, a diamond-shaped piece of beaten metal.  Photo: Pinterest

A modern Hagoo, worn just below the waist, associated with marriage rituals, with mixed beads and fish bones. More on this piece in coming posts. 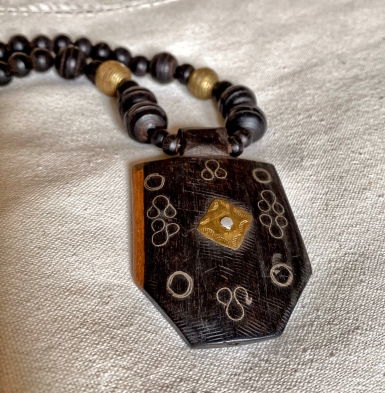 Below, personal collection of Sudanese beadwork and jewelry, showing a hijil, matarig, hagoo and beadwork collars and aprons.

This is a cultural post for Women’s Education Partnership.  See At a Glance  and Facts and Figures to learn more about our mission and impact.

3 comments on ““A Necklace of Shells from Distant Seas…””