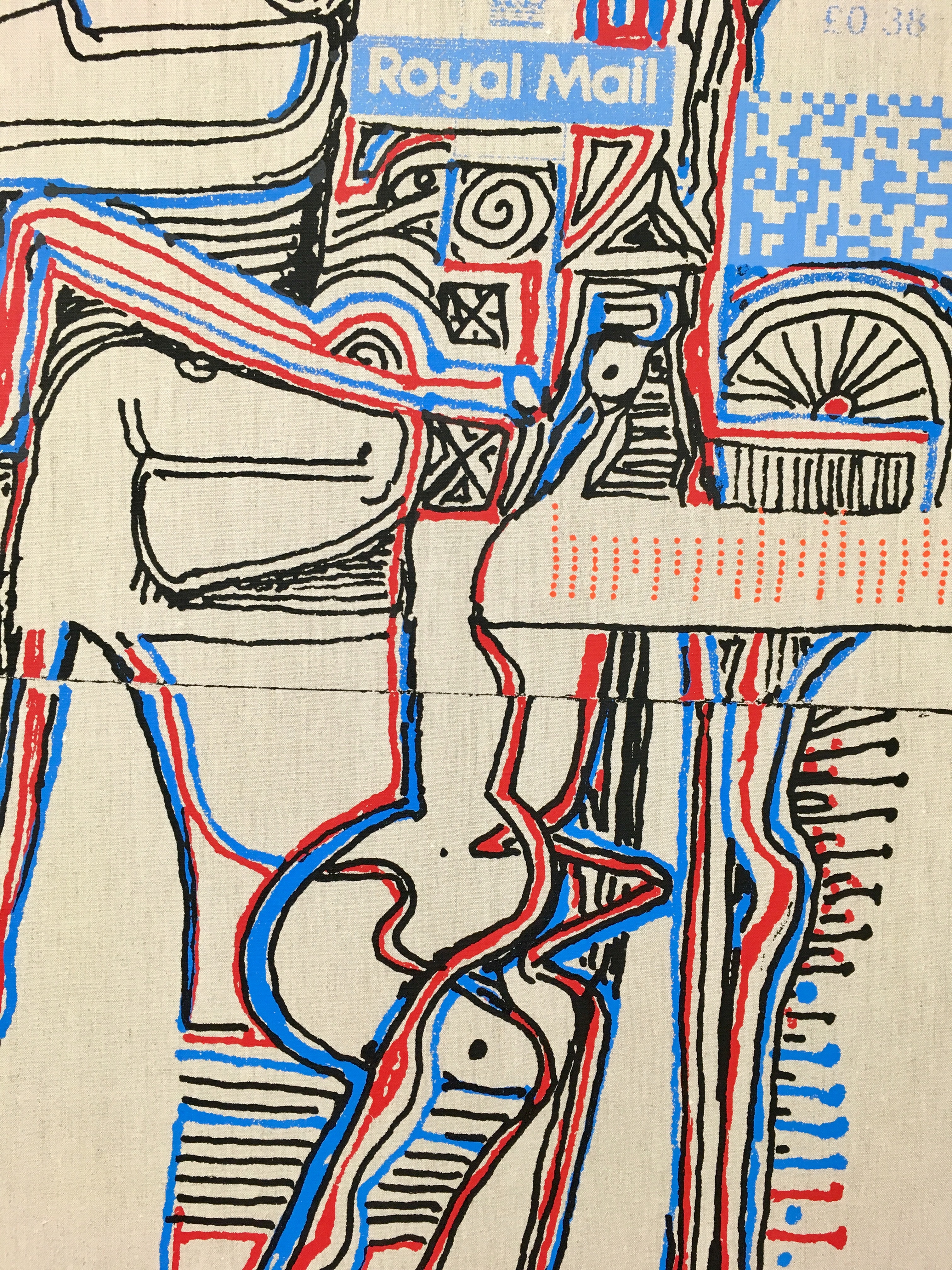 Sketch based on photo by A.J.Arkell, in Darfur Pottery, Sudan Notes and Records, (see below) of types of sukhkhaana, (referenced below) made by Tama people, EL Fasher in 1920s.

Above, a potter in Abri in the early 1980s. Anthropologists have speculated that women dominated pottery production with their mold and coil techniques, over thousands of years until wheel use, favored by men, prevailed.

“It takes formless matter and shapes it. It transforms, through the operation of heat, from wet to dry, soft to hard, raw to cooked, natural to cultural, impure to pure. Broken pots can be re-ground and incorporated into new pots to show the reversal of time. They lend themselves to abrupt fracture to mark isolation, destruction, a clean break, ……”

Nigel Barley, Smashing Pots, on the cultural and symbolic power of pottery with its resonances of “wombs, bellies, spirit, conception and essence.”

This is the first of two blogposts dedicated to women’s central role in a technology and craft that changed the course of human development. A craft, many have noted, where it is the emptiness of the form created within that defines its meaning. In Part 2, I explore the symbolic power of pottery, the customs and taboos surrounding women’s pottery – gendered magic – and offer accounts of interviews with Sudanese women potters, sourced from colonial to contemporary records. The inclusion of colonial data in this post does not imply approval of British colonialist policy in Sudan.

This introductory post outlines pottery’s African origins before exploring some colonial accounts of women potters in the Nuba Mountains and Darfur. I would welcome any comments, personal anecdotes and other insights into this fascinating field, hoping to further awareness of women’s role in pottery in Sudan.

See At a Glance for our mission and reach.

Women with gourd pots, festival Shatt Dammam in 1980s. My thanks to Robin Gill, Sudan English Teachers FB Group, for this photo. Much traditional pottery is said to imitate naturally occurring forms, such as those of gourds.

Use, Beauty and Sudan’s Craftswomen

Water jars, or zir in a Khartoum street. The zir is also used to store fermenting fasikh, (a small fish known as dabis in Nubian). After gutting, salting and drying, they are placed in the zir, which is closed tightly, sealed with textile and stored for one or two years. (source: Living with the Past in Modern Sudanese Village Traditional Pottery Production in the Ad-Dabba Bend of the Nile, Aneta Cedro, Bogdan Zurawski.) More in next post.

Use and Beauty – Pottery’s African Origins

“..the disassociation of use and beauty is a purely arbitrary thing. It is true that pots exist which are useful and not beautiful, and others that are beautiful and impractical; but neither of these extremes can be considered normal: the normal is a balanced combination of the two.” Bernard Leach

Use and beauty in harmonious balance in the bowl from the Nuba Mountains below:

Experts believe that pottery appeared in Africa two thousand years before the emergence of agriculture and, unlike the Near East where hearth-based grinding and roasting of grain prevailed, was associated with the boiling of fish and porridge and later, beer. Open-mouthed, globular pots with dotted wavy line decoration of the Early Khartoum period originated in the Sahara some ten thousand years ago.

For Randi Haaland (Food, Pots and Gender), the boiling of porridge and fish stews led to a health revolution, “enabling early weaning, increased fertility and improved infant survival rates.” Highlighting the parallels between pottery and food making with their kneading and firing processes, Haaland claims it is reasonable to assume, “within female sectors of activities that the important innovation of applying fire in order to transform clay jars for storage to clay pots for cooking took place.”

Use and beauty united in this piece, reminiscent of calabashes in shape, with burnished and textured decoration, by Lafofa Nuba women potters using paddle, anvil and coil techniques. Barley records that this piece was collected by the anthropologist Seligman in 1928 and notes colonial era speculation on the nature of the decoration, possibly representing loose wide-meshed braid needs such as pots are often swung in from the roof. Smashing Pots, Feats of Clay from Africa, Nigel Barley, British Museum 1994, p134.

“Another feature peculiar to the Lafofa is the use they make of broken potsherds in flooring their huts: the sherds are wedged into the ground with the smooth surface upwards, very small pieces are used and laid with some ceremony; when well oiled they have a pleasant tessellated effect.” Nuba Pots in the Gordon College, p25

Below, colonial classification of Nuba Mountain pots, from Nuba Pots at the Gordon College, by Oswald Bentley and J.W.Crowfoot, Sudan Notes and Records, Vol.7, No.2 1924.

Sudan’s Craftswomen – From the Colonial to the Contemporary

Below, pots made by women potters in the Nuba Mountains region during the colonial era, from Nuba Pots in the Gordon College, Sudan Notes and Records (see below). In the 1980s very similar pots were still being produced.

“The pots are made by women and, in some villages, only for use in their own households, so that I had some difficulty in buying any at all, the people asking, ‘hasn’t he got a wife of his own to make it for him?’ “ Further Notes on Pottery, by J.W. Crowfoot, Sudan Notes and Records, Vol.8, 1925.

Speculating on the influence of Nigerian taboos relating to female deities and gendered pottery making traditions on local culture, Arkell notes “It is interesting to note that in Darfur all pots are made by women. This must be a survival form the time when pots were taboo to men. It explains a Berti informant’s hesitation when I asked him how in his language one said “ he lit a fire under the burma” and his eventual reply, ‘you cannot say HE lit a fire under the burma for that would only be done by a woman.’ So too in the Nuba Mountains a man never uses a pot…” Darfur Pottery, Sudan Notes and Records, A.J.Arkell.

Below, sketches based on a plate from Darfur Pottery, by A.J.Arkell, Sudan Notes and Record, illustrating the stages of pottery making by women using the coil technique in 1939.The sketches illustrate applying the last roll of mud making the rim, (left), forming teh rim with a wet rag held in the left hand, while the pot is kept turning with the right, (top right) and working the neck thinner and the inside thinner with a piece of gourd.

Recent research has sought to explore how complex and nuanced gender norms have informed pottery making in Africa. It has been suggested that fertile versus non-fertile is the significant determiner. More in next post.

“The making of pots among the Nuba is the work mainly of the elder women. Women are specially busy with the carrying of water, cooking and the brewing of local beer, marisa, so it is natural the they should have to make the vessels necessary for these operations. In the Nile Valley also many of the cooking pots and water jars are made by women, the manufacture of the coffee pot, gebana, and the ablution pot, ibriq, on the other hand is the business of men, they are both recent introductions.”

Among the Nuba a men never uses a pot for washing himself, he does this with a calabash or a bukhsa. He waters his tobacco plants similarly with a burkhsa , never with a pot.

On certain hills – Krongo, Talodi, Tosomi, Masakin, Miti – no woman is allowed to approach a food vessel during her periods: a particular house and particular vessels are set apart for her use at this time. But this is not the case on other hills.

Nuba Pots in the Gordon College, (source, as above)

Many of the Sudan Notes and Records articles referred to in this blog post are open access on https://www.sudanarchive.net

Today, much archeological research focuses on observation of modern Sudanese potters’ techniques to identify and explain parallels with ancient pottery making. The techniques, tools, motifs and forms recorded by colonial observers such as Arkell and others showed remarkable continuity with pottery found in earlier and ancient sites.

“The usual objects everywhere, potsherds, broken gourds, old corncobs, bits of straw, and tamarind seeds, were used for smoothing the clay. A bowl of water is always at hand in which the smoothers continually dipped..” Further Notes on Pottery, J.W.Crowfoot, Sudan Notes and Records, 1925.

Modern and Ancient Pottery Traditions in the el-Zuma and Karima Region in Sudan: An Introduction to Comparative Studies (Pots Project). More on this in next post.

But there is an urgency to this research. The potter’s craft is dying out in Sudan and many of the women potters interviewed by researchers which I record in the next blogpost acknowledge that their craft will not endure to the next generation. There is an acknowledgment that if the study of the craft and skill of pottery making as a whole has been neglected, the role of craftswomen as potters has suffered even greater neglect. Gender-based historical, anthropological and technical analyses of pottery making, its function and symbolism are attempting to rebalance perceptions.

See too, the modern perspective in:

And contemporary Sudanese potters discussing their work in

If you are interested in modern Sudanese ceramic art, you might enjoy The Scorpion and The Coffee Pot, on the Anglo-Sudanese potter, Siddig El-Nigoumi.

If you are interested in Sudanese crafts and women’s economic empowerment, you might enjoy Towards Economic Empowerment and Weaving Brighter Futures